I've mentioned in the past some of the color scheme scripts that I've used to make Vim nicer, and there are some really nice ones. However, I was growing tired of them lately. I looked around the Vim site trying to find something better but came up empty handed.

Around that time I ran into Hamish Macpherson's blog, and noticed he was using a really nice color scheme on his code screenshots, and then read in one of his comments that it was a slightly modified version of the monokai theme for TextMate.

I decided to try porting them to Vim, though it's a very loose port. I've been using and tweaking it for a few weeks now, but I'm pretty satisfied with it. I decided to post it here just in case anyone else is interested.

There are two variations to the theme; which one is used can be controlled by setting the g:molokai_original variable in your .vimrc file.

The default option (molokai_original == 0) uses the dark gray background variation similar to Hamish' version, and looks like this: 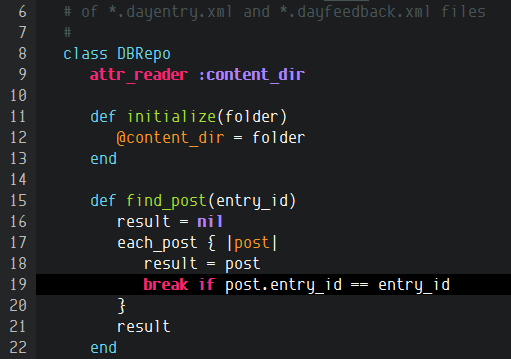 With molokai_original == 1, the script will use the original monokai colors, and looks like this:

You can get the script from my dotfiles repository on github; where you'll find always the most recent version. Enjoy!