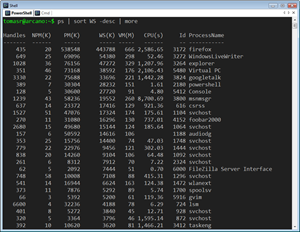 I'm a heavy user of the command line on Windows, and for a number of years I've used the open source Console application instead of running plain cmd.exe as my console of choice.

I currently have mine setup to host both cmd.exe as well as powershell, and do make heavy use of the Tabbed interface when I need to keep multiple prompts open.

It's a really cool utility and you can certainly configure it with a lot more eye candy if you like, like alpha transparency, custom backgrounds and so on. Me, I like my setup pretty minimal.

I've been trying to keep more up to date with the releases of some of the utilities I run on a daily basis, and Console is no exception. I'm currently running build 2.00.138, which was recently released.

If you're using older releases of the Console 2.0 beta set, then I highly recommend updating to this latest one. A few of the previous builds had some repainting issues that sometimes caused the console display to be corrupted or missing characters, but this latest build has been working great for me and the display update actually seems a bit faster for me.