Yesterday I decided to go a bit on the bleeding edge and went ahead and installed KDE 4.0 on my machine running Kubuntu Gutsy Gibbon. I started installing kde4-core first, then went for the whole kde4 package. 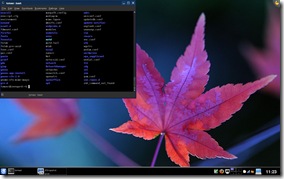 For the most part, the installation went OK. There are many UI changes, and I'm not sure I like all of them, but it's nice enough for the most part. I did run into some issues, so maybe this might help others solve them.

KDE 4.0 tends to use a bit more resources of your graphics card. Because of the sleep/hibernate issue I was running the open source Radeon driver (which doesn't do much acceleration), so it was very slow at first and I was experiencing some nasty graphics corruptions at times that forced me to restart the machine.

I then tried enabling again the restricted fxglr driver that Ubuntu can install automatically, and that felt a bit faster, but I was still suffering some heavy video corruption.

Finally, I tried ATI's (AMD's, really) latest linux driver, which I downloaded from here. This is actually working much better: I'm seeing no video corruption at all (as long as XComposite is disabled) and seems a bit snappier, though a few things in KDE4 (most notably, the shutdown screen) are just very sluggish overall regardless of which driver I was using.

Of course, now sleep/hibernate don't work again, so I need to try to find a workaround for that.

Update: I noticed that the fglrx driver wasn't loading properly, so I went in and removed all traces of the older ubuntu driver versions and reinstalled the ATI driver again, and now I've got both 2D and 3D acceleration (i.e. with DRI) working. Plus, it seems that sleep, at least is now working correctly again. Whoot!

The second problem I started to notice was that I couldn't run applications that required elevated privileges from the KDE menu. I could still run them using 'sudo' from the command line, but if I tried running them from the KDE menu, it would keep rejecting the password I was specifying. Sounds very like what other people reported here.

I was able to fix this by editing my ~/.kde4/share/config/kdeglobals file, and adding this at the bottom:

Whenever I boot directly into KDE4, I have no network right at the start, because the Wireless connection isn't configured.

Unfortunately, it seems the KDE4 updates don't include a native KDE4 version of knetworkmanager so it seems it still runs as a KDE3 app.

The shutdown dialog in KDE4 just nags me, for two reasons:

One issue I have not yet researched too much, but that is causing some issues is that kwalletmanager seems to crash right after I log in every other time, forcing a full reboot to get it to work again, which obviously breaks havoc with other things, including, for example, the wallpaper not getting painted on the desktop [1]. Hopefully this stuff will be fixed by the time Hardy Heron ships.

[1] Update: Looks like this isn't related to the other issue at all. KDE simply refuses to paint the wallpaper on many ocassions (but opening the dialog settings and clicking apply fixes it). No idea yet what the issue is.