I've been doing some little Java work the last few days (and have a bit more coming down the pipeline (nothing big, just a few small changes and additions to existing applications), and decided to look again at Eclipse. It had been a while since I had used it last (and even back then it was pretty decent). 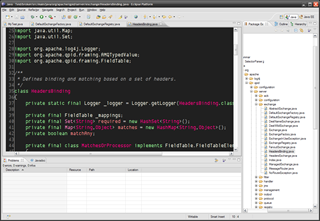 It's interesting to note that even with Eclipse around, I've been doing a lot of work simply editing the code using Vim and compiling using the command line tools :-).